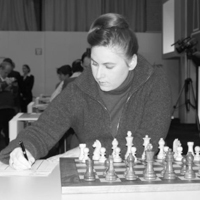 The norms of chess say that if a piece is touched during a game, it should be moved (except for the cases where the player applies the jadoube rule). It is impossible to imagine a take back on a GM level. However, it has happened on several ocasions, as the interesting Milan Matulovic Jadoubovic case.

Probably the biggest precedent in history happened in the Linares tournament in 1994. Garry Kasparov took a move back in his game against Judit Polgar. Except Judit, no one else saw the takeback, but Spanish TV filmed the scene. Kasparov dropped the Knight on c5, lifted hand a bit, then saw he was losing a Rook, took the Knight back to d7 and few seconds later played Nf8. Judit was stunned, looked around for the arbiter but didn’t complain at all. Here is the game, you can see that the mistake on move 37 would have been decisive.